Minecon 2015 was an extremely well organized event prepared for a guest list of 10,000 and delivered absolutely pre-rehearsed perfection. 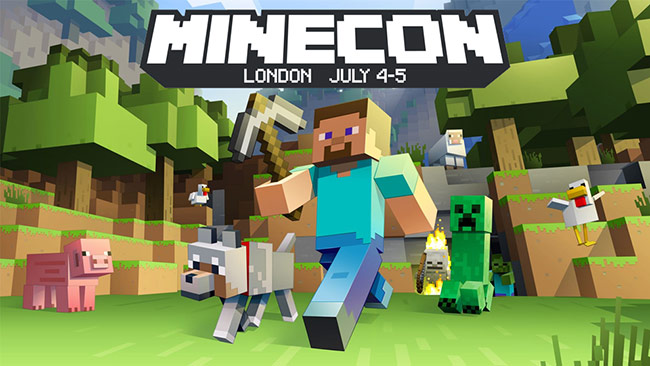 Saturday 4th July, 7.55AM- Full of excitement we walked up the steps to the Excel Centre in London England. 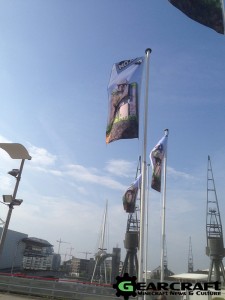 The sun was shining (unusual for England), a gentle breeze was blowing the Iron Golem flags flying outside and there was no queue…….wait, wait just a minute, no queue! Instead we were greeted by a sea of smiling faces dressed in green Minecon tee shirts. The Minecon hosts were out in force, prepared and ready for the 10,000 people about to stampede through the doors over the next two hours.

The whole registration process was rehearsed to perfection, the efficiency and obvious enthusiasm of our green goblins would have put any first class airline stewardess to shame. 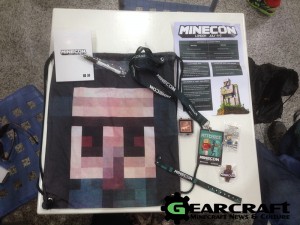 Within seconds we were into the main atrium running the length of the Excel centre, goodie bags in hand, wrist bands firmly attached  and our ‘Attendees’ as our son named them hung around our necks. Well that was easy we commented to each other as we took a seat to eagerly examine the contents of our Iron Golem printed bags. First out came a map of Excel with the times and locations of the Panels for the weekend. Next came a note book and pen printed with Minecon 2015, A Mini Steve figure which we later discovered was wearing a Minecon2015 cape, a Pin Badge and finally lurking at the bottom of the bag was a small white box. I have never seen my son open anything with such care, the anticipation was killing him but he realised that it must contain something of value. As he pulled back the cover to reveal the clear plastic box with a foam cushion cradling a square golden Minecon coin a gasp escaped from his mouth.

None of the rooms either side of the atrium were unlocked instead we were confronted by two huge Iron Golems, exquisitely decorated and just a small taste of the delights that would await us in the main Expo Hall. 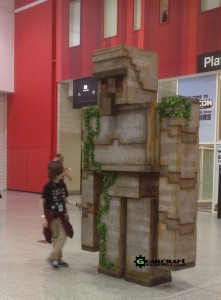 We strolled along checking out the banners hung outside each of the main rooms containing times of the panels that would take place within and for the first time a list of the people that would be appearing on each Panel. With each passing banner the reality of what we were about to be part of was starting to sink in.

By the time we reached the first open door the time it was 8.30AM. People were already starting to queue inside for the opening ceremony and seen as there was nothing much else to tempt us (other than the plethora of food stalls) and with the coolness of the room beckoning we decided to join the queue. This turned out to be one of the best decisions of the weekend. Rule no1 of Minecon, if you see a queue join it! For an hour and a half we coped a squat on the cool floor, were entertained by a magician and made new friends, it only seemed liked minutes.

Then suddenly in unison the entire crowd, by now numbering around 8,000 I would guess, rose to their feet and gently started to walk forward. A mixture of hosts and security corralled the now excited crowd into the main hall. Seeing for the first time 10,000+ seats set out in neat rows and the huge screen and stage the noise level of the crowd began to rise. We all took our seats with the hosts ensuring there were no gaps left. We all waved as a huge crane with a camera attached swung out over the auditorium and a voice came over the speakers saying ‘Smile your live to The World, THE WORLD!’

The show began with a countdown and Lydia Winters stepped out on stage to start the proceedings then Bang! A flash of light followed by darkness. A few seconds silence then the amazing opening sequence by Element Animation kicked off the event to a huge round of applause.

Seeing it on the screen it was designed for was breathtaking. In fact, I would recommend everyone checks out the entire opening ceremony, amazing things from the UN utilizing Minecraft, a Guinness World Record and Stampy, Squid and Dan larking around on stage reaffirmed that this was going to be unlike any convention any of us had attended before, get ready to be amazed was the message coming across and the weekend lived up to the billing. 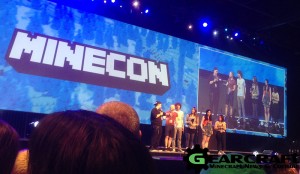 After the opening show we kept our seats to watch Stampy and crew on stage then a gentle wander through the crowds to the Expo Hall.

WOW, the first thing that greeted us was life-size Minecraft trees, not one or two but dozens, as far as the eye could see. Minecraft biomes, soil cubes piled up topped with snow and in the centre Big Ben with the Ender Dragon curled around about to pounce on anyone who dared to say that they didn’t like Minecraft! It was official we were inside Minecraft on peaceful creative mode. 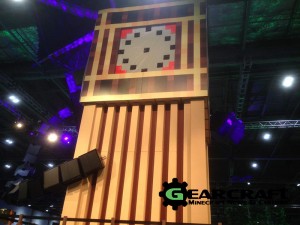 Anyone who has attended conventions in the past will know that the Expo Hall is usually somewhere you avoid, filled with stalls to empty your pockets. But this is Minecon, things like that don’t happen at Minecon apparently. There were a total of two stalls, the first selling Minecraft themed clothing and the second Minecraft merchandise. Everything else was free. There were fairground themed stalls with games like hoopla, but Minecraft themed, yes these were free and gave prizes. An area of 20 new independent computer games for people to try, card games, photographers and yes even these were free.

Usual big company competition had been put away with XboxOne and PS4 consoles side by side where people could play, you guessed it Minecraft. Not sat at tables but in cozy designed communal areas. There was space, benches, the whole area felt like you were in a Minecraft park, with air con! Did I mention it was hot? Oh and I haven’t touched on the Minecraft Zoo with life-size mods and the Art Gallery, yep an Art Gallery, at a computer games convention! 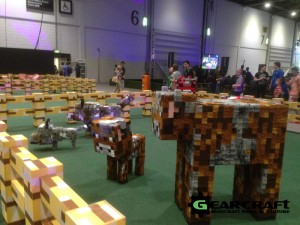 Three stages were located in the Expo two hosting Panels while the third the ‘Competition’ stage had A list YouTubers and developers commentating on the Hypixel competitions that ran across the weekend. This brings me nicely onto the Hypixel gaming area, another huge WOW. They brought Build Battle, Mario Carts, Speed Runs and Hunger Games. There were plenty of computers with relatively small queues of around ten to fifteen minutes. The occasional technical hitch but the staff they brought with them along with our amazing green hosts resolved these so quickly that you marveled in their technical know how, plus they were all so friendly.

If I had to sum up the Minecon experience in one word that would be it, friendly. I have never been amongst such a huge crowd filled with such a diverse range of people from over 70 countries and all so completely accepting of one another. Age, race, physical and mental disabilities all being treated equally with compassion and kindness. Yes we left with a warm fuzzy feeling.

So was it all green grass and blue skies at Minecon, not quite. Comfy shoes are a must as you queue, a lot, but then it’s in England this year and the Brits are good at that. 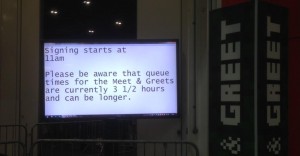 We didn’t manage to make it to the Meet and Greet. I understand the reasoning fitting in with panel times but the meet and greets were a surprise. Inviting people to queue for over three and a half hours at times to have Autographs signed and photographs take with a selection of YouTube stars. The only issue was that you wouldn’t know who they were going to be until you reached the front of the queue. This left parents resorting to Twitter to try to locate their children’s favourites in an attempt to get a photo. Thankfully many of the YouTubers were very obliging stopping for photos as they were travelling between appointments, coming down from the stage before and after their slots and in some cases answering the twitter shouts to arrange short meet ups. They were all on top form and definitely deserve another huge shout out.

There were so many panels that it was impossible to attend all that you wanted, however, on the plus side they did cover a huge variety of topics from utilizing Minecraft in education, the fundamentals of the game, Huge builds, game updates through to the life of a YouTuber to name but a few. I’m led to understand from a fellow attendee that the red stone for beginners was particularly inspiring and that’s on my YouTube list. Leading on to the plus side that most of these panels are recorded and posted on line so top tip #2, prioritize the panels where you feel you would like to ask questions.

The Small World ride was on our list for the second day but after talking to other attendees in the hotel the first night we decided to give that a miss as it was a reoccurring complaint that the decorations in the main hall outshone this by far!

And there is the HoloLens, after the announcement a couple of weeks previous everyone wanted a go on the HoloLens, sadly there were only 25 tickets, no we weren’t one of those lucky people.

That’s about it for the negatives, not that many really, which leads us onto the highlights. Obviously the range of activities in the Expo Hall and the Decoration. The quality and Range of the panels. The circus on the Saturday evening was amazing and a great decision to abandon the usual fairground in light of the temperamental British weather. We watched 4 young men compete in Speed Run on the Competition stage hosted by AntVenom. They were phenomenal completing Diversity2 in under an hour! Netty Plays and GizzyGazza recreating the dragon from the main hall in Build Battle. So many other great panels and of course DanTDM,  Stampy and crew were on awesome form entertaining all the little ones and answering multiple questions after about their favorite foods and colors with huge smiles on their faces. The List goes on and on.

The main thing we all came away with was the fact that we want to play more Minecraft. We want to experiment in new areas. We will maintain friendships that were made over the weekend and more than anything else we all desperately want to attend the next Minecon, whenever or wherever that may be!

Hey Gearcrafters! Now It's your chance to share with us, just hashtag #YoGearcraft on your Twitter post with a link or image to your art, creations, videos, servers or whatever and it will appear right on our #YoGearcraft page for millions to see! It’s that easy! So what are you waiting for!? Give us a shout out #YoGearcraft!
Tags: Minecon 2015

The Official Minecon 2015 Picture Gallery For Your Consumption 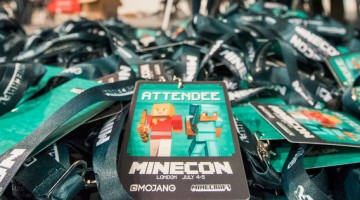 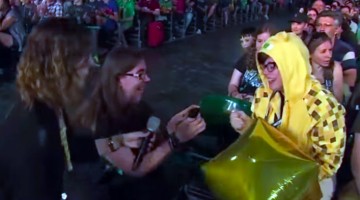 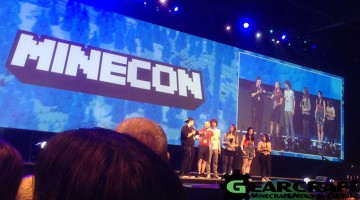