We’ve heard really amazing Minecraft parody music before and we’ve even heard original songs from CaptainSparklez and more. But you’ve never heard original Minecraft songs like this before. Jordan O’Hara also better known as Wolfrik on his YouTube channel has Minecraft songs which will touch your heart. His music reminds me of a MTV Unplugged Thom Yorke, front man of Radiohead, with his melancholy styles and solo guitar chords. Just give a listen to his latest recording, “Blocky Hearts”:

Wolfrik says he self taught himself how to play and record these instruments when he isn’t going to school for computer science. WOW! Here’s another song of his which really pulls on the strings of the heart.

Hey Gearcrafters! Now It's your chance to share with us, just hashtag #YoGearcraft on your Twitter post with a link or image to your art, creations, videos, servers or whatever and it will appear right on our #YoGearcraft page for millions to see! It’s that easy! So what are you waiting for!? Give us a shout out #YoGearcraft!
Tags: minecraft songoriginal minecraft musicwolfrik

Next post Check Out This Amazing Modern Fantasy Build ! 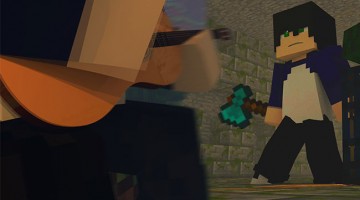