MineAtlas – See A Map Of Your World 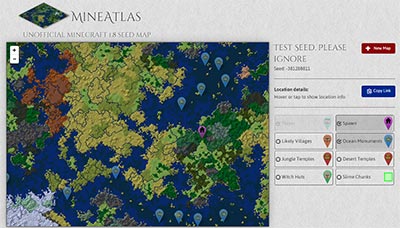 This is really cool, MineAtlas is a biome map of your Minecraft world seed. It also works as a village finder, slime finder, ocean monument finder and other things finder. MineAtlas is more preferable than AMIDST because you can quickly open it without installing anything. Perfect!

Here’s some quick info about MineAtlas:

What does the map show?

Biomes. The colour of the map corresponds to the biome at that point, e.g. blue for ocean. You can hover or click to get the biome name displayed on the info panel. What you build doesn’t effect the biome so won’t show up.

Shading is an indication of how hilly the area is – it doesn’t correspond to the exact hills in the game as I can’t do that quickly enough at this scale.

The markers show where things like temples are, most of them are turned off by default so as to not accidentally spoil your game. If you created a map from a level.dat save then a player icon will track you as you play.

What the hell is level.dat and where do I find it?

It’s the file that Minecraft stores your seed and player position in for a given world. A level.dat will be in each of the folders at:

What is a seed?

The seed is a phrase, word or number that fixes Minecraft’s random number generator in a fixed pattern. You can set it in the Minecraft world creation options, or by default you are given a random one. If two maps are made with the same seed they will be identical. The wiki has more info.

How do I find out what my seed is?

You can use the “/seed” command (Press “t” then type “/seed”). This may be disabled on some servers unless you are admin/OP.

The map is wrong! You suck!

Calm down dear, it’s only a website. There are a few things that can cause this:

Does it work for xbox/ps/Colecovision?

Based on what people are telling me (I don’t have one) it doesn’t work as the console version has different terrain – anyone know what PC version it corresponds to?
Will there be an option to see the Nether and The End?
I might think about putting in Nether Fortresses as their location on the overworld where you need to make a portal.

Hey Gearcrafters! Now It's your chance to share with us, just hashtag #YoGearcraft on your Twitter post with a link or image to your art, creations, videos, servers or whatever and it will appear right on our #YoGearcraft page for millions to see! It’s that easy! So what are you waiting for!? Give us a shout out #YoGearcraft!
Tags: AMIDSTBiomesMineAtlasWorld Maps

Next post China: Land of the Dragons on Craftventure 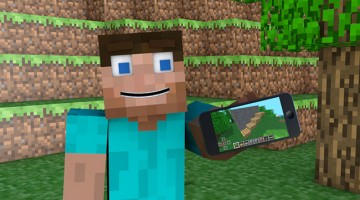 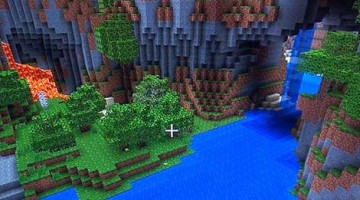