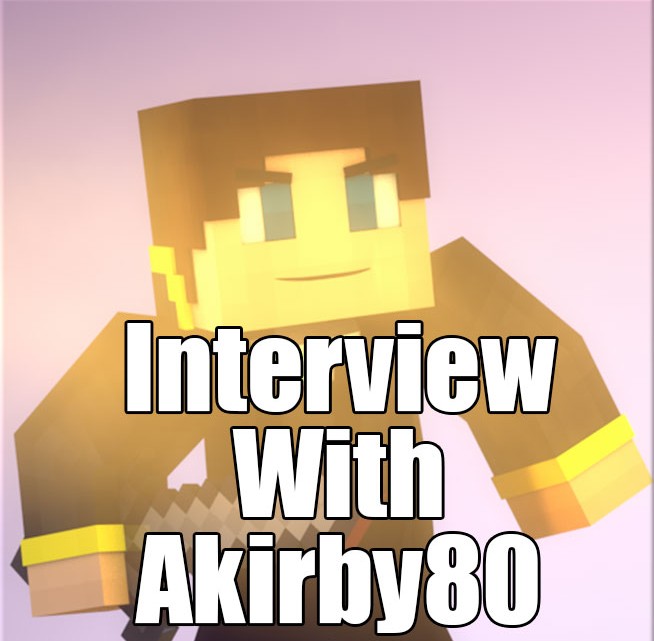 Last week, we interviewed WeirdoMC, and we’re continuing the theme of Minecraft Youtuber with Akirby80 this week. Famous for his Top 10 Videos, he just passed 1000 subscribers.

We interviewed him before he hit the milestone. Here’s his 1000 Subscribers Announcement video:

Tell us a bit about yourself?

I’m a 20 year old college student and I’ve always enjoyed filming and editing videos. I decided to give YouTube a shot due to this. I’m currently majoring in Special Eduaction in college and I’m minoring in Horticulture. Other than that, I’m a huge sports fan and I love spending time with friends.

Like I said, I’m currently a college student. I have a part time job in which I do landscaping and such but during the school year that’s about all I do. During the summer, I work as a teacher at a summer camp.

What’s the best perk of being a youtuber?

Interacting with new people every day. I’ve met some awesome people while I’ve been doing YouTube. Some of them have been huge YouTubers who I’ve gotten the chance to become friends with and others have been people who don’t make videos. Everyone has some stories to share and they’re all awesome.

Well, I wake up and drive to class, after that I go back to my house, record a video, edit the video and get it prepared for the next day, then I do my homework, then I check my channel for any comments I need to reply to. After that I watch some videos and by the time I’m done with that, it is time for me to get some sleep.

The greatest challenge for me is keeping on my schedule. I often fail to find time to record a video or I fail to upload a video on the correct day. It is something I’ve been working hard at doing and I’m going to start improving on it a lot more.

Who inspired you to start creating videos?

Rather than just choosing one person, I’m going to choose a crew. “The Crew” consists of KYR Sp33dy, JahovaWitniss, NobodyEpic, Deluxe 4, Deluxe 20, SideArms4Reason, G18, Legion, and ShadowBeatz. They all make gaming videos together and to see how they’ve become best friends through gaming is awesome. They also remind me a lot of myself interacting with my friends so it makes their videos so much funnier to me.

What was your original goal in setting up a channel?

Originally, I didn’t take YouTube all that seriously. I would just post random vidoes here and there but once I started getting into it, I set my goal for 100 subscribers. I’m way past that now. It is awesome to think about how much I’ve improved.

You’re very close to hitting 1000 subscribers. What does that feel like?

It is kind of mind-blowing. As I said, I had a goal of 100 subscribers and I’m approaching 1000. It feels amazing that people actually want to watch my videos.

What does the future hold for your channel?

What’s some advice you’d give to those trying to get started in the Youtube Gaming scene?

I always tell people to start YouTube because you enjoy it and play games that you enjoy. Don’t start YouTube because you think you’ll get popular and make money. Start it because it is fun to do and you like to make videos. As for playing games you enjoy… People can tell when you are actually having fun playing games. Your video quality will be a lot better if you are actually enjoying the game you’re playing.

Want to be featured in an interview on Gearcraft? Send me an email – [email protected], and i’ll be in contact.

Hey Gearcrafters! Now It's your chance to share with us, just hashtag #YoGearcraft on your Twitter post with a link or image to your art, creations, videos, servers or whatever and it will appear right on our #YoGearcraft page for millions to see! It’s that easy! So what are you waiting for!? Give us a shout out #YoGearcraft!
Tags: 1000 subscribersinterviewminecraftyoutuber