At E3 this year we saw Microsoft's demo of Windows 10 Minecraft on HoloLens, Now in Spring 2016 Minecraft will be available for Oculus Rift! 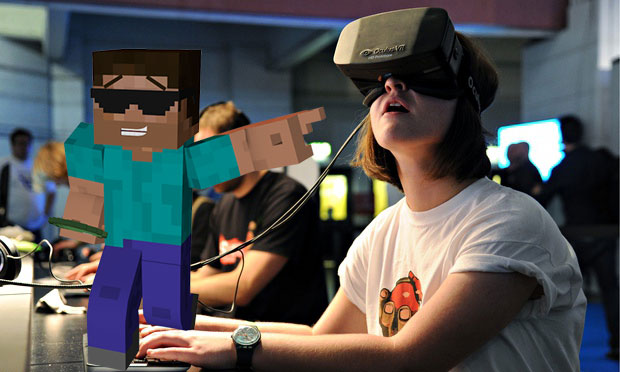 If you are following OculusVR’s founder, Palmer Luckey, on Twitter then you would have read the breaking news that Minecraft Windows 10 version is coming out this Spring 2016 for Oculus Rift!

Minecraft is coming to Oculus!

Even Notch had something to say about it:

My opinion on minecraft/oculus? Neato! Now, back to ignoring Quiet because D.D. obviously is much better. — Markus Persson (@notch) September 24, 2015

On Reddit, Palmer Luckey, Founder of OculusVR said, “To cut to the chase: We won’t be launching Rift preorders during the show, so don’t wear out your F5 key while you are watching the keynote! I would not normally make this kind of post, especially since it is not really news or a change in plan (I publicly talked about this with several media outlets as early as E3 and Gamescom), but I want to make sure nobody is disappointed or surprised.
Connect is a developer show first, enthusiast show second, consumer show third. There will be some consumer-facing announcements, but all in the context of their relevance to developers and the growing VR ecosystem. We will be announcing and co-announcing some really cool stuff.”

I think you should be able to watch using the Twitch app, but watch out for data useage! – Palmer Luckey

What’s really cool is you will be able to watch the VR through the Twitch.tv app, so if you have Google Cardboard, it’ll almost be like you can experience what the gamer is experiencing… pretty cool!

Stay tuned as we bring you more.

Hey Gearcrafters! Now It's your chance to share with us, just hashtag #YoGearcraft on your Twitter post with a link or image to your art, creations, videos, servers or whatever and it will appear right on our #YoGearcraft page for millions to see! It’s that easy! So what are you waiting for!? Give us a shout out #YoGearcraft!
Tags: HoloLensmicrosoftminecraftoculus riftOculusVRPalmer Luckeywindows 10