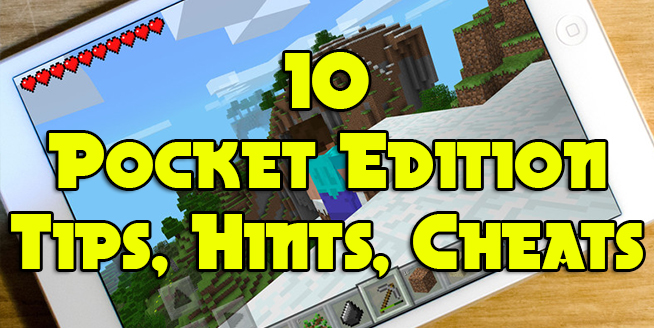 Minecraft Pocket Edition lets you enjoy all the fun of Minecraft right in the palm of your hand. From building colossal structures, block by block, to just trying to mine for coal in order to make torches to survive the night, there are some things you need to learn to make the most out of the game. Whether you’re battling monsters in survival mode or just having fun building your own 32-bit kingdom, we’ve got the tips and hints to get you there faster!

1. What’s the difference between creative and survival modes?

Minecraft Pocket Edition has two main game play modes and depending on your gaming style, you may heavily prefer one over the other. Creative mode gives you endless supplies of all inventory, there are no monsters and mobs to combat, and you can craft and create until your heart’s content. If you like game play similar to that of the Sims, you’ll most likely prefer Creative mode.

Survival mode features both night and day and you start off with nothing. You’ll need to harvest resources in order to build even simple things such as tools and work tables. You also have to beware of angry mobs and monsters that come out at night. If you prefer a challenge, Survival mode is what you want.

2. What are seeds and how do I use them?

Aside from naming your first world when starting the game, you also see a section labeled “Seed”. A lot of people ask what this is. These are simply seed packs you can load if you have specific codes. Depending on what seed pack you load you may end up in a world full of lava or one full of ice. They make for a nice change if you want a pre-made layout that you don’t have to work so hard for.

After some searching online, I found quite a few seed pack codes. I won’t tell you guys what they do so it intrigues you to try them all out. Be sure you use capital letters where they are present.

And as always, if you guys have found any exceptionally cool seeds, leave ’em in the comments!

The first thing you want to do in Survival mode is harvesting wood. Do this by walking up to a tree and punching it. After so many punches you will see a little wood block fall when the wood is destroyed. Walk over it to pick it up. Make sure you look up to punch the entire tree since your character can reach rather high. To start, make a habit of harvesting trees whenever you have them.

4. Survival mode: Create a Crafting Table and a few tools

Once you’ve harvested a few trees, hop into the Craft menu and create a Crafting Table. There are lots of tools you can’t create without it. You don’t need to make more than one as they are reusable. Unless you plan on leaving a few in multiple locations for convenience, which is perfectly acceptable as well. To create a Crafting Table, just create some wooden planks first and then the option should appear.

After you have a work table, create a few tools such as a wooden axe. You can break through stone a heck of a lot quicker with a pickaxe than you can with your fist. After you’ve got some stone, go back to your Crafting Table and create some stone tools. You’ll need these in order to harvest important items such as coal.

Coal is an item you’re going to want to harvest as soon as possible. In my experience, you want a stone pickaxe in order to break through stone and get to coal. In most instances, you can see flecked rock which sometimes indicates coal is present. Personally I’ve never found this to be a reliable method of finding coal.

I do however always find coal if I dig downwards at least five blocks into stone with a stone pickaxe. I typically start digging in veins of earth where stone meets dirt and grass. This almost always yields coal the fastest. Once you’re further into the game and have mines, you probably won’t have such an urgency to find coal. In the beginning, this is the most efficient way.

6. Survival mode: Seek shelter by night, and have your torches ready!

Mobs and monsters will come out at night and that’s something you need to be prepared for. It’s pretty much impossible to have enough time to build a house for protection on your first day. Instead, dig a cutout into the stone that you can hide in. I typically dig about 8 or 10 deep and then round a corner out for me to hide in.

Light also keeps away mobs and monsters so be sure you have torches on hand. You can easily stick a few on the entrance to your cave. This should keep mobs away for the most part.

7. Don’t dig a hole you can’t get out of, literally Sometimes in Minecraft you can’t resist the urge to dig. Just make sure when you do, you aren’t digging a hole you can’t get out of. I’ve been guilty of this and it’s not easy, especially if you don’t have any torches on hand and have no sticks to make any. It’s another reason I suggest always having at least a few sticks on you, if not full torches. It’s a pain to have to fashion makeshift steps in the dark, and the torches will make it easier if you do happen to get into a tight spot.

8. Make yourself a respectable home Once you’re feeling comfortable with yourself and you’ve started harvesting quite a few supplies, you can start moving out of your cave by building an actual home. I make sure I harvest quite a bit of wood and turn them into planks with the Crafting Table. You can also use stone and other ores for building materials. The best way to learn about them and how to create them is to play in Creative mode for a while so you can explore a full inventory first.

If you don’t want to bother with mobs and monsters at night, but still want to play survival mode for the challenge in itself, you can do away with enemies rather easily. Simply hop into settings and move the difficulty slider all the way to the left. This turns on Peaceful mode and gets rid of mobs and monsters. Some items are reusable so make sure you collect them before you move on. In the beginning make sure you reuse your crafting table so you don’t have to keep creating more. To break the Crafting Table down just punch it until it breaks and then walk over it to collect it again.

Original Article by Allyson Kazmucha, can be seen here at imore.com

Hey Gearcrafters! Now It's your chance to share with us, just hashtag #YoGearcraft on your Twitter post with a link or image to your art, creations, videos, servers or whatever and it will appear right on our #YoGearcraft page for millions to see! It’s that easy! So what are you waiting for!? Give us a shout out #YoGearcraft!
Tags: cheatshintsMCPEPocket Editiontips 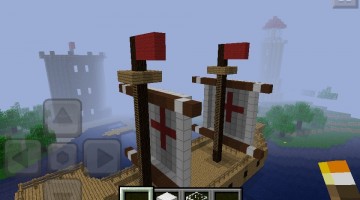 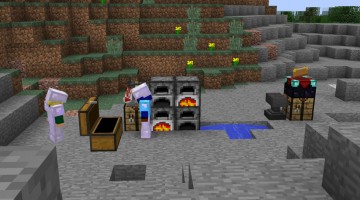