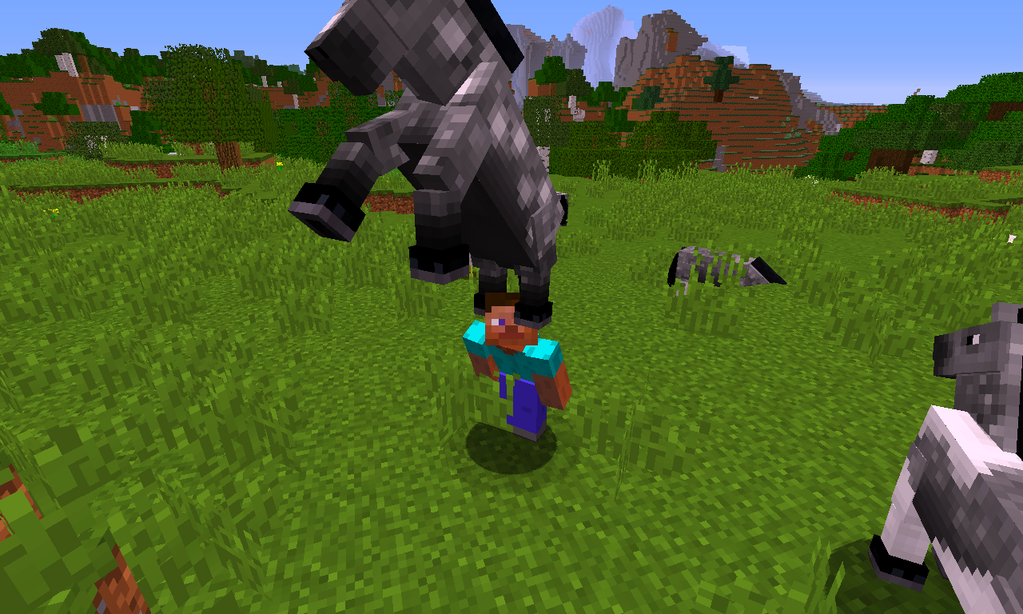 It’s been a while since Mojang announced a Minecraft snapshot, but today Mojang has announced the theme of the next update and finally give a peek at what’s coming in the next few months!

Minecraft 1.10: The Love and Hugs Update

We thought long and hard about what the next update should be about. Over the last few years we’ve touched everything from survival to creative, monsters to blocks, overhauled the world itself and the way people play in it. It took us a while to come to a conclusion on where we should branch out next, but with some help of some recent public criticism we realized the true direction we should be taking with this truly inspirational game.

It is well known that Minecraft is played by all ages, we’ve met kids as young as 3 to adults in their 90s. As much as this continues to impress us, we’ve realized that this puts us in a special position with certain responsibilities that we should uphold. We are in a very unique position to make a difference to the world and we have decided to accept this new role in society. We’ve thought long and hard about this, but we finally feel happy to announce that we are now changing the general direction of the game Minecraft. Starting from the next update we will be focusing on the things that make life worth living, promoting healthy relationships with the environment and its inhabitants.

To get snapshots, open your launcher and press the “New Profile” button. Call it “Snapshots” and check the box saying “Enable experimental development snapshots” and save. To switch to the normal version, you can select it in the dropdown at the bottom left corner of the launcher. Back up your world first or run the game on in a different folder (See the “new profile” dialog).

We have removed the ability to directly harm other creatures. You should be rewarded for helping, not hurting.
Removed Health and Hunger. We feel that these are not appropriate gameplay mechanics for a game about love, sharing and peacefulness.
Added a new “Love” meter. This fills up the more you help others, and others help you.
“Survival” mode has been renamed to “Existence”.
Animals

Bats are now 20% cuter. Squeek.
Chickens can now be ridden by any player less than two blocks tall.
Cows will now alert you to important events that you may have missed by means of an audible notification.
Pigs can no longer fly, but can now climb on walls.
Rabbits are fluffy.
Sheep will, if asked nicely, share their wool to keep you warm.
Squid changed, but we’re still trying to figure out how or why.
Monsters Inhabitants

“Monsters” are no longer named as such. The preferred term is “Inhabitants”, as they live in this world just like you or me.
Steve and Alex have realized that the inhabitants are not evil, and just want to hug and get along.
Creepers no longer explode. They have gotten over their nervous disposition and are much more friendly once you get to know them.
Skeletons have revealed themselves to be very efficient farmers, having a permanent source of bone meal on them at all times.
Blazes are actually pretty cool guys and will defend you from harm.
Guardians have put aside the initial misunderstanding, and now welcome you into their home with arms… erm… eyes… wide open.
Ghasts are no longer frightened so easily, and will offer you rides throughout the nether.
Slimes are now pretty fun to hang around with, sharing their secret jumping abilities to those that will listen.
Witches are super friendly and surprisingly knowledgable. They will help you by sharing their potions.
Zombies are extremely cuddly and love to hug.
The Wither has been replaced with his lovable pink counterpart, promoting vitality and nourishment to the environment around him.
Weather & Environment

Removed rain as it upset a lot of players.
Falling snow has a chance to make exposed chests mysteriously full of goodies at midnight.
Villagers & Villages

Trading has been rebalanced. We felt that the previous incarnation wasn’t very fair, and believe the new system is a step towards helping fix this.
Villagers will offer you help in picking up items or blocks, in exchange for a small fee for their services.
Iron Golems can appear as a manifestation of the village’s love for you.
Blocks

As we no longer have a hunger system, food items now give Happiness instead of Saturation.
Carrot on a Stick has been removed. It was just cruel to pigs and we are very sorry for this.
Combat

Dungeons have been replaced with homes, offering a much more inviting and comfortable experience for everybody.
All caves have been checked by the Minecraft Safety Committee to ensure a safer experience for players.
Desert temples no longer contain TNT traps, and come with a nice, safe way to access the bottom floor.
Some cliff edges may be lined with fences to avoid accidents by the unwary traveller.
Jungle temples are no longer trapped, containing instead a new rare Golden Creeper to reward exploration.
Potions

Some potions such as Strength or Harming have been removed, as we no longer have a place for them in the game.
Added four (4) new potions:
Love Potion
Happiness Potion
Potion of Sharing
Potion of Caring
Fun Potion
Transportation

Horses can no longer be ridden as this was deemed unfair to the horses.
In compensation to the horses, they can now ride on your shoulders.
Minecarts now have a fluffy pink interior.
Added obsidian boats which are impossible to break.
Improved regular wooden boats.
Added dirt bikes.
Ender pearls no longer transport you to the target, but instead the target to you.
Weather & Environment

Added rain back as it soothed a lot of players.
Falling snow has a chance to make exposed chests mysteriously full of goodies at midnight.
Game Settings

Not everybody had the same experience playing Minecraft under different configurations, so we decided to remove all the graphical settings.
You may now only have one world, in order to reduce fragmentation and to treat all worlds as equals.
Some resource packs were prettier than others, giving some players an unfair advantage in the amount of fun they were having. This has been fixed.

Hey Gearcrafters! Now It's your chance to share with us, just hashtag #YoGearcraft on your Twitter post with a link or image to your art, creations, videos, servers or whatever and it will appear right on our #YoGearcraft page for millions to see! It’s that easy! So what are you waiting for!? Give us a shout out #YoGearcraft!
Tags: minecraftsnapshotUpdate