Microsoft HoloLens Teams Up With NASA- Minecraft in Space?

When Microsoft unveiled their HoloLens technology at the E3 convention, we all lost out minds. The demonstration of the HoloLens was just an example of what our crazy future in the next few years will hold. Previous article we mentioned earning Bitcoins in Minecraft while you play, and now we have augmented Minecraft.

The full extent of possibilities of the HoloLens are still unknown, but NASA and Microsoft have teamed up to develop a new platform, Sidekick, which will be used to assist NASA astronauts on the International Space Station. Sidekick can assist astronauts by connecting them to their support team down here on Earth via Skype technology, while providing augmented instructions on their visual interface to complete missions which they call “Remote Expert Mode.” Another feature would be without human aide called “Procedure Mode,” which be more for guiding the astronaut through complex procedures such as repairing and training.

“This new technology could also empower future explorers requiring greater autonomy on the journey to Mars.”

Microsoft and NASA have scheduled a launch on June 28 with SpaceX to bring a couple devices to the ISS for testing. After the devices arrive at the space station, crew members will test and verify the software and hardware functionality in a standalone mode. 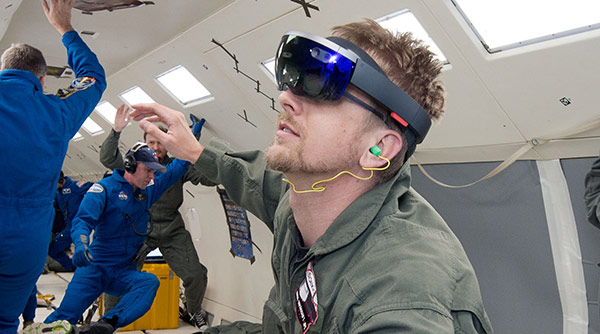 NASA expects astronauts on the station will first use Sidekick by the end of the year. Sidekick also will be used and evaluated during the NASA Extreme Environment Mission Operations (NEEMO) 20 expedition set to begin July 21 when a group of astronauts and engineers live in the world’s only undersea research station, Aquarius, for two weeks. The Aquarius habitat and its surroundings provide a convincing analog for space exploration.

Hey Gearcrafters! Now It's your chance to share with us, just hashtag #YoGearcraft on your Twitter post with a link or image to your art, creations, videos, servers or whatever and it will appear right on our #YoGearcraft page for millions to see! It’s that easy! So what are you waiting for!? Give us a shout out #YoGearcraft!
Tags: augmented realityHoloLensissmicrosoftminecraftnasaproject sidekickremote assistancespace station